What should I consider when picking my piece to perform for WSMA Solo & Ensemble Festival?

Picking the right song can make or break your performance. Don’t pick a song because “you like it” or “it’s the only one on the list that I’ve heard of.”  Spend considerable time thinking about which song will highlight your skills. Like any WSMA vocal category, start with the music. Scan the music and be sure you have the range and vocal skills to effectively sing the piece. Range is very important — don’t pick a song if any of it is too high or low for you. Also consider style and genre — some modern songs require a “pop” style of singing, while others make use of traditional and bel canto training. You should also pick a character to which you can relate, or something that fits your personality. For example, some students are skilled at presenting dramatic pieces with passion and sincerity, others are skilled at performing musical comedy. Ask yourself what you have in common with the character. When we discover relationships between ourselves and the characters that we play, it gives our performances depth and humanity.

What can I do to better prepare for my music theater performance?

Research the play, the character, the scene where the song is from, and work with the drama teacher at the school, if one is available.

When performing for WSMA festivals, how much of the overall rating is based on the character and blocking?

It depends on the song and the character. Certain songs clearly call for action and blocking. Others can be presented with sincerity while remaining stationary. The key is that all movement should be with intent and support the context of the piece. Avoid arbitrary walking or unnatural gestures. An acting teacher once said, “in musical theatre, don’t move without reason, but search for reasons to move.”

What does “blocking” mean in regards to my individual music theatre piece?

Blocking is any physical movement made during a performance motivated by the lyric, your intention, or in active pursuit of a goal.

Ideally, blocking should enhance the story on the stage by:

Is it ok to sing/act my song directly to the judge?

No. Please use a focal point just above the judges head or they may feel like your scene partner and they want to enjoy your performance.

Should I keep one basic “focus point” during my performance?

You should have one basic “focus point” just over the head of the judge. That doesn’t mean you have to stare at this point the whole time you are singing but make that focus point your “home base.” In researching your character and the story you are telling, you may need to change that focal point to other people or spots in the room to engage the scene and the audience. You can look away to think, or address someone else but then come back to this focus point/home base. The perfect exercise for this is to talk to someone about something…notice that you don’t stare at them the whole time (so you don’t stare at your focal point, but you DO look away to think). So you treat the focal point like you would a real conversation with another person or persons.

Do I have to wear a costume or use a prop?

The WSMA rules state that small props are allowed, but not required and costumes are optional.

What information should be included in the introduction?

Then, instead of telling us “something interesting about the piece,” set the scene.

Some students present this information in character and/or as short original monologue. That is great, but not required. Also, while the song itself must be memorized, the introduction can be written out.

What are some common pitfalls in this event?

What are some common strengths in this event? 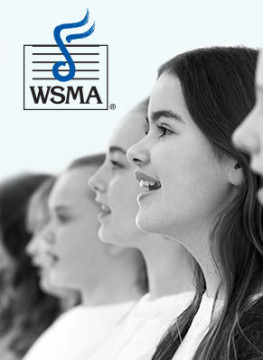 Sometimes day-to-day challenges can seem to consume a week’s worth of energy. However, proactive planning can go a long way to efficiently and effectively achieving goals. In this issue, we tap into big-picture, forward-thinking ideas — all with a sense of purpose and perspective for the future!

Special Web Resources
Have you checked out the quality videos and standards-based activities made especially for Wisconsin music classrooms?  Visit WisconsinPerforms.org…

WSMA is a registered 501(c)(3) non-profit organization.
Scroll Up